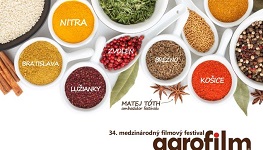 The AGROFILM - International Film Festival is a unique competition for films in the fields of agriculture, food, nature conservation and rural life. The festival began with a opening ceremony on Monday, October 1th, 2018 and ends with ceremonial announcement of results on Friday, October 5, 2018. A total of 91 films from 24 countries, including Germany, the Czech Republic, the USA, Australia, the United Kingdom, Russia, Kyrgyzstan, Iran, Nepal, Congo, and Mongolia, have been recorded in this 34th annual AGROFILM. The University of Veterinary Medicine and Pharmacy in Košice has been included in the festival as one of the satellite projection sites. The premiere of the films took place at the UVMP in Košice on October 2rd – 4th, 2018.

The main prize of Agrofilm 2018 was awarded to the Czech film Healthy Landscape by director Ivan Stříteský, who also won the highest award last year. The document introduced audiences to places where farmers and nature conservationists were able to agree, so that neither crop production nor landscape quality could be achieved. The AEKO - Agroenvironmental-Climate Action of the Ministry of Agriculture of the Czech Republic was created to support them.

The Netherlands represented two recorded films and both received awards. A film awarded by the Rector SPU Nitra Good Nutrition is a story that genetic modification has been used to develop crops in order to increase their nutritional value, reduce the use of chemicals to protect against pests, or provide crops to people. The second Dutch documentary about the angry and hard-working people Cor and Henk - fishermen from Oosterschelde was filmed in the tidal waters of the largest Dutch national park, Oosterschelde. The film was awarded the Prize of Mayor of Nitra.

Also a nine-minute movie of Farmer Pork directed by Pavol Štec was awarded, which won the prize of the Slovak Agricultural and Food Chamber for Slovak film. The short-story reportage film brings to the viewer an objective comparison of the difference in pork quality that is not produced in quick-cooking compared to what we normally buy in stores.